The senior Gaelic football team have been training hard and playing matches since the beginning of the year.

They reached the semi-final and were playing their match in Walkinstown.

It was a super game with everyone trying their very best and playing hard for themselves and their team mates.

Unfortunately they were beaten by a very small margin of two points after a brilliant fight back in the second half.

Well done to all of the players and the coaches. You all played a brilliant game and well done for getting to the semi-final. 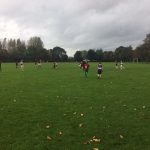 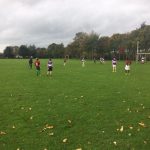